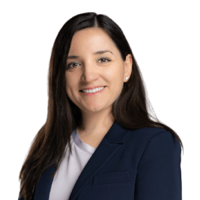 Biography
Dr. Dima Ezzedine earned her medical degree from the Lebanese University, Faculty of Medical Sciences, in Beirut, Lebanon. She completed two residencies in obstetrics and gynecology—one at the American University of Beirut in Lebanon and the other at Tufts Medical Center in Boston and at Maimonides Medical Center in Brooklyn, New York.

Dr. Ezzedine is an expert in performing state-of-the-art vaginal and robotic pelvic surgeries addressing conditions such as pelvic organ prolapse and urinary incontinence.

Dr. Ezzedine has contributed to several peer-reviewed publications, including International Urogynecology Journal, Journal of the Endocrine Society, Clinical Obstetrics and Gynecology, and International Journal of Gynecology & Obstetrics. In addition, Dr. Ezzedine has delivered numerous oral presentations on a wide range of subjects, including pelvic organ prolapse, urinary incontinence, and pelvic floor ultrasound. She's received numerous awards throughout her training, including an award from the New York Obstetrical Society for outstanding resident paper.

Dr. Ezzedine, who is fluent in three languages (Arabic, English, and French), has conducted research and worked in a variety of settings—from the Women Refugee Health Center at Boston Medical Center to visiting rotation stints in the Department of Gynecology at Cliniques universitaires Saint-Luc in Brussels, Belgium, and the Department of Gynecology and the Institute for Research on Cancers of the Digestive Tract at Haute-pierre Hospital in Strasbourg, France.

Dr. Ezzedine works as the staff urogynecologist in our Women's Health Center in Plymouth. Outside the office, she enjoys spending time with her son, baking, and discovering various world cultures through art, music, history, and travel.


Dr. Ezzedine has been featured on our blog:

"Top-notch medical care. I can't say enough about the doctors and staff. I would not go anywhere else. Cutting-edge treatments and diagnostics to get to the root of the issues and smart approaches to treatment plans."