Practicing in North Easton and Dedham

Biography
In 1987, Dr. Fitzgerald graduated from the University of Notre Dame where he was Vice President of Alpha Epsilon Delta, the Premedical Honor Society. He then attended Georgetown University School of Medicine where he was the recipient of the Dean William C. Maxted Award as the outstanding student in urology in 1991.

Following medical school, Dr. Fitzgerald returned to his home state and completed his residency in general surgery at Massachusetts General Hospital and urology at the Lahey Clinic Medical Center. While a resident, he spent a year doing research at Harvard Medical School’s Laboratory of Cancer Biology in Boston.

After completing his residency training, Dr. Fitzgerald served as a staff urologist for three years at the United States Naval Hospital in Jacksonville, Florida. He returned to Massachusetts where he has been in private practice since 2000. He and his wife, Leslie, have four children.

Dr. Fitzgerald is a regular contributor to our blog:

“Dr. Fitz was with me every step of the way from the office visits prior to surgery to the day of the procedure and then after. Very caring and I would recommend him to anyone.” 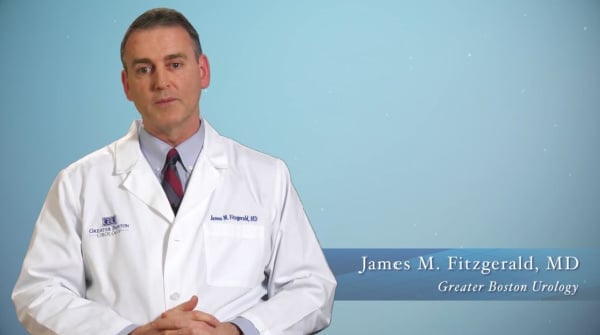 Watch Dr. Fitzgerald: How is Bladder Cancer Diagnosed and Treated?