Editor's note: This article was reviewed and updated on October 31, 2019.

This month, it's all about "pogontrophy"—the art of growing a beard (and moustaches and sideburns, too).

See, for over a decade now, November has morphed into “Movember”—a month where men are encouraged to grow their winter fur, and for good reason.  The goal is to increase people’s awareness around prostate cancer, testicular cancer, and men's mental health issues (including suicide prevention), all while raising monies to fund research. 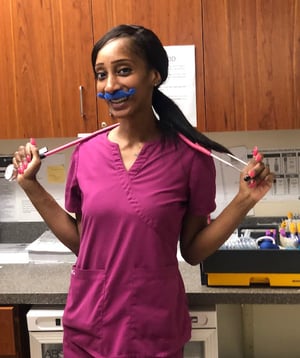 A couple of Australian “mates,” as they say in The Land Down Under, started Movember in November 2003 in an effort to bring back the moustache to high fashion. When they realized how much conversation happened around the event, they decided to keep the concept of the moustache, but dedicate Movember to a universal men’s issue: prostate cancer (testicular cancer and men's mental health issues were soon rolled in). They launched the Movember Foundation in 2004, and the rest, as they say, is history. It took off from there and expanded around the globe.

When did Movember launch in the US?

It officially launched in the US in 2007 (partnering with the Prostate Cancer Foundation), and it has been gaining traction every year since then.

Prostate cancer is a serious disease: 1 in 7 men get prostate cancer; 2.9 million men have the disease already; it’s the second largest cause of cancer deaths in men; but it has an excellent survival rate if caught early enough. Awareness is critical, as is monies that support research that lead to breakthrough treatments. (Check out our roundup of prostate cancer resources.)

It's the most common cancer in men under 40. Early detection is the key to successful treatment. According to the Movember website, "by 2030, we'll halve the number of men dying from testicular cancer."

Every minute, a man dies from suicide. (Read that sentence again.) Suicide is its own epidemic. Suicide prevention has become an even more important topic for Movember in recent years. As the Movember website states, "Movember views mental health through a male lens. We focus on early intervention, engaging men and working to their strengths. By 2030, we aim to reduce the rate of male suicide by 25%."

Is Movember just for men?

Nope! Movember boasts over five million “Mo Bros” and “Mo Sistas” who’ve participated in the month-long event since 2003. Women can help by encouraging the men in their lives to “let it grow” this Movember, host events, fundraise, and even sport a fake moustache or beard.

How much money has Movember raised?

How can people get involved for Movember 2019?

There are many ways to get involved, including donating, growing a moustache or beard, hosting an event, and simply spreading the word. Learn more at The Movember Foundation.

At GBU, we’re joining ZERO – The End of Prostate Cancer, a national nonprofit organization, to promote “Grow and Give” this month. We encourage everyone to snap pics of their moustaches and beards and share them on Twitter, Facebook, and Instagram with the hashtag #GrowAndGive. Ladies, you can get in on the fun as well with a faux moustache! Check out more great ideas here. As you can see from the picture above, we’re getting in on the fun as well.